This news story helped my year 10 class to improve their German today. 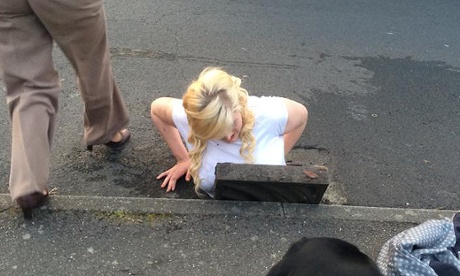 If you haven't seen it, a  16 year old from Dover dropped her iphone into a sewer and (instead of rejoicing) she decided she'd climb down after it. She got stuck and had to be rescued by a fire crew, much to the amusement of her neighbours who filmed her and took pictures because that would be the neighbourly thing to do. Obviously.

At the moment, my year 10 German class is studying the topic, Friends and Family.

I've been trying to get them to use a variety of intensifiers and adjectives to describe people and thought it'd be a good idea to show them the story and then get them to come up with as many different ways of describing her as they could.

The title was: Wie dumm ist sie? (How stupid is she?)

The nicer students (the girls) came up with phrases like

and the boys came up with the likes of

An interesting and amusing way to get students to use some really creative vocabulary and they thought it was fun, too.
Posted by Dom at 09:34