There has been a lot of discussion on various MFL fora about introducing literature to KS2 pupils of MFL in  England and Wales.

I don't think that Mr Gove is suggesting that our primary school pupils should study the works of Molière, Goethe or Cervantes, at least I hope not, but I do think that there is nothing wrong with introducing our younger pupils to books, magazines and comics which children in France, German, Spain and everywhere else, are reading.

However, I do think that most students would be able to cope with a simplified version of the fables of La Fontaine.

When I stared teaching in the 1990s one of my training schools used a French text book called Avantage. At the end of each chapter Avantage had some Boule et Bill comic strips.

For the uninitiated, Boule is a 7 year old boy (and has been since 1959!) and Bill is a cocker spaniel. 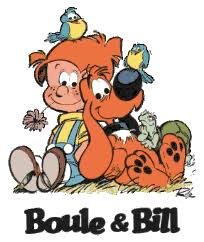 To the students this was the best thing about the book. It was a great way to introduce French culture and get the students reading for pleasure, or at least out of curiosity. They loved the one which was in franglais!

Boule et Bill is a very popular BD in the French speaking world. They have also appeared in cartoon films and a series of books for younger readers, too. Almost all of their adventures can be bought on amazon in print, kindle and DVD versions, too.

Last year Boule et Bill made it to the big screen in a live action film.

Here is the trailer:


Watching this would be an ideal way of introducing the characters to a class of young French learners. They could describe the characters, what they wear and what colours they wear, what their characteristics are, learn words for animals, etc.

Much better and much more fun than text books and worksheets.
Posted by Dom at 03:14