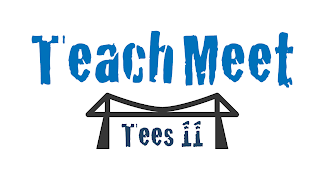 This week I attended the first Teachmeet Tees. It was organised by Steve Bunce and Simon Finch and the venue was the ARC in Stockton. It was reasonably well attended, but it wasn't the quantity of attendees but the quality which really impressed me.
I got to meet some old friends and some new ones but the most important thing was I actually learned new things.
I think teachmeets can be great for linguists as you get to see what teachers of other subjects are doing and I love the informal atmosphere. Very often you can find a use for an idea, a piece of software, or a website that is ideal for use in languages lessons that was not intended to be used in MFL lessons at all.
The presenters were:
Martin Waller who told us about his Growing Greener Together project. This is a whole school approach to creative learning through gardening, cooking, conservation, enterprise and using digital technology.
Pete Fox. Pete showed us some excellent resources for improving numeracy across the curriculum. One of which was tutpup which allow users to play lots of maths games but also compete with other children from across the world.
Alasdair Douglas told us about an amazing year 7 project at his school which was based on the Angry Birds games. The pupils designed, created and played their own versions of the game using skills they had learned in science, maths, geography, technology, etc. He tells it a lot better than I do, perhaps because he was one of the instigators and facilitators.
Mark Clarkson showed us his "image of the week" idea. This is where he uses photos to engage students in tutor time to get the to think and speak about the world around us. The pictures come from boston.com where there are galleries of news related photos from around the world.
Simon Finch showed us the history of his dealings with the apple corporation from buying his first mac to reviewing for mac user magazine in the early days and everything since and also showed us how to make mini books and gave us a few dozen reasons on how we could use them creatively in our classrooms. Simon also took dozens of photos of the event which can be found on his flickr page.
Lynda Dixon shared her love of writing implements in her "Stationery or stationary?" presentation which (as well as looking like a plug for all things Apple-y) also included a video of José Picardo's ideas on how people currently use technology in their everyday lives.
Helena Butterfield showed us all about e-twinning with schools around the world and the adventures of Michel, the teddy bear traveller, who has visited schools in many different countries as a result of a recent e-twinning project.
Fiona Joyce showed us the amazing world of Storybird an amazing site for collaborative storytelling. Fiona has even set up a storybird wiki for teachers of languages to share storybirds they have made. If you haven't seen her wiki yet, you should visit and be inspired.
Steve Bunce also presented in collaboration with Simon and urged us to look at his Kindles and play on his Xbox kinect.
Helen Daykin, representing sponsor I am learning, provided the most amazing cupcakes, too.
My presentation "10 ways to use mobile phones in your classroom" included a phone poll to gauge how great it would be for the attendees to use mobiles in their own classrooms. I made it with the free version of smspoll. it seemed to go down OK despite my terrible cold and sounding like the offspring of Mariella Frostrup and Joe Pasquale.
Here are the results of the online mobile phone poll: 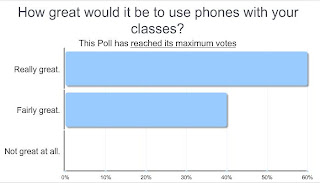 It was a lovely evening and I'm really pleased to have met you at last. Loved your mobile phone ideas.

Thanks, Lynda. It was great to finally meet you, too.