MFL on a need to know basis...

It's the holidays and my brain has gone into overdrive...

Last week, I taught my one of my year 8 French classes the imperfect tense.

But I didn't really. I never mentioned the imperfect tense once.

I thought I was doing OK.

The broad objective of the lesson was to say what you did and didn't used to like at school.

A little "grammar note", some examples (je, tu, il, elle, and on) and some scaffolded exercises comparing then and now:

Then, a speaking activitity.

One student raised a hand:

"There's more to it. You've missed loads out. Look."

I was handed a tatty "grammar booklet" from this student's last school, which contained pretty much all the grammar needed for a grade 9 at GCSE.

The student was correct. I had, indeed, missed out loads.

Does this group (none of whom has chosen to study languages next year!) really need the stress of learning the full paradigm of regular imperfect tense verbs just because?

What would they do with it? 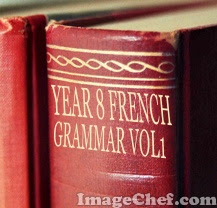 Isn't it better to teach them how to communicate a little in French rather than hammer them with grammar that most French people don't need to know?

Am I doing them a disservice?