Soap plots and schemes of work.

I know what you're thinking.

He really has lost the plot this time.

Stay with me on this.

As some of you may be aware, as well as teaching, I sometimes write funny things for the radio and internet spoof news sites.

This is one of mine:

and this one, too:

I never said they were funny...

Anyway, I follow lots of comedy industry people on social media and read a lot of blogs.

A while ago I came across a blog written by John Fleming* entitled, How to write, structure and maintain a TV soap opera like Coronation Street.

It's a fascinating read, especially if you know very little about how television works and, even if you do, it's quite an eye-opener.

You're probably not aware that there is a formula used when writing soaps.

According to John's blog it's: 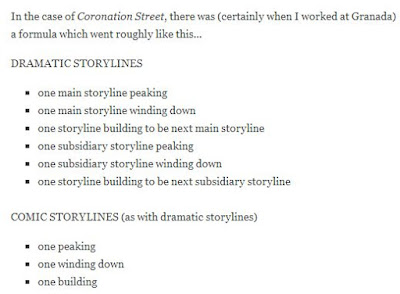 I was looking at this and I thought that it was actually very similar to the way we probably should be writing schemes of work or whatever they're called at your school. (You may even do this already. If you do, you're in the minority....)

Ours are called MTPs.

Anyway, back to the meat...

Yes, I'm suggesting that we should use a similar formula to write our schemes of learning.

Because text books don't do it and students tend to unconsciously compartmentalise their knowledge.

For instance if you teach imperfect tense with hobbies, will they automatically realise they can use it to talk about holidays, too?


Main storylines will be topics and subsidiary storylines could be grammar points.

With me so far?

So how does it work?

OK. I'll give an example.

We start with a transition topic: self and others.

The main story line is: Me and my family.

We include the basic vocabulary and the subsidiary stories; numbers, être, avoir, possessive adjectives and ER (s'appeler) verbs.

We also occasionally start to throw in some other phrases which will become main learning later. e.g. ne...pas, ne...jamais

The second topic is: Where I live.
Family is now winding down but still the
re in the background (Ma tante habite à...)

ER verbs are peaking with aimer, détester, préferer, and habiter.

The next subsidiary stories are appearing now: dans, à, en, and other preposisitions.

My town is giving way to my house, inside my house, my dream house.

Adjectives will be the next subsidiary....

In true soap style all of these stories will reappear at some point although some may return as rather more than a subsidiary.

Of course you, as the writer, will get to decide the main stories, the roles played and the recurring characters.

You can change them to suit your audience and decide how much depth you go into with each one.

So, ignore what the text book says, don't compartmentalise, and make sure their is some fun built into it.

Creativity and practical tasks are your Comic Stories.

You could be animating, creating gifs, mini booking, making comics,  acting, or whatever you choose...

If I/we do this, then topics, grammar points, etc, will be constantly revisited and the phrase "but you did this in Year 8" will become extinct...

* Read John's blog about his visit to North Korea here. It's really good!