On Saturday, I was lucky enough to attend the 2nd MFL Show and Tell event organised by Marie O'Sullivan of NALA  and sponsored by those nice people at Sanako.

The event took place in Manchester at the Instituto Cervantes.

During the day we saw 15 presentations and ate our way through dozens of sandwiches, biscuits and Haribos.

The first presenter was Joaquin Bustamente, a primary Spanish teacher in York.
He showed us the Tricky Phonics he does with year 1 and year 2 Spanish.
The pupils have particular trouble with the "R" and "J" sounds and he showed us some actions he does with the students to get them to get the pronunciation correct. He made us join in with the actions and said the best way to get pupils to learn is "don't explain it - just do it."

Tom Kelly showed us his code grids.
This is a 5 by 4 grid with bits of sentences on them. Each grid is also numbered. Students are given a series of numbers and have to build that sentence. Similarly, they can be given a sentence and then they have to write the corresponding code. Students can also show progress by adapting the sentences from the grids and adding to them. 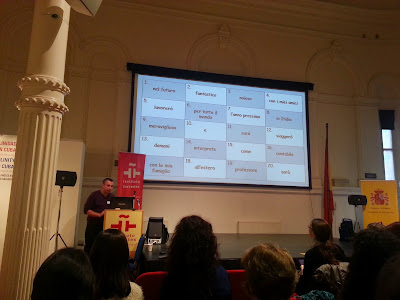 After Tom, we heard from Maria Minguez who teaches primary maths in Spanish.
Maria showed us some of the songs and video clips she uses with her students and explained the ways in which she uses youtube videos to explain ordinal numbers to her students.

Jo Hilton teaches primary Italian and showed us how she had adapted English songs into Italian to get the children to learn Spanish sounds.
Shew also showed us "keyhole" cards. These are cards with a keyhole shape cut into them with a picture behind them. Pupils have to guess the object hidden through the keyhole, in the target language.
Jo also shared how she uses cooperative learning structures, in particular the Quiz Quiz Trade activity.

Barbara Cheded then showed us how she uses real and virtual dice in her classroom.
She uses low tech customisable foam dice and make dice lite an ipad app which lets you customise virtual dice.

Marie O'Sullivan was the next presenter.
She gave us lots of links to, and ideas how to use, authentic literary texts.
These included:

Marie also told us that following European sports stars on twitter would also be a good thing as they often tweet in English and their own language.

I did the final presentation of the morning session.

An updated version of "Skinny jeans, baked potatoes and petechial haemorrages", to show where students and teachers can keep up to date with the most current language usage.

The afternoon session started with Soraya Borja and her presentation, érase una vez...
She explained how she used stories to introduce vocabulary and cross curricular themes to improve students' Spanish. She also uses dice activities to get students to add extra details to the stories or even changing them completely by introducing characters from other stories.

Next came Alison Lindsay who showed us some primary games to get students speaking in the target language. These included: qui a la clé?, le facteur and le balai.
Alison also uses jigsaw puzzles to help practise vocabulary.
Alison's final idea was a cultural & food based exercise. Students are given a map of the French départements and some food packaging. The aim of the activity is to get students to read the packaging and identify which département the food comes from. The students then have an idea as to what the area is like based on the kind of food which is produced there. 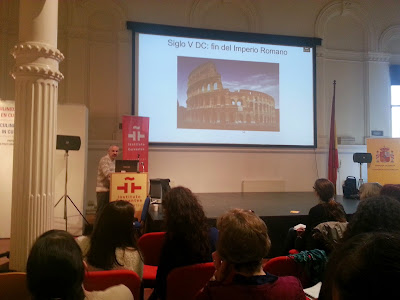 Barbara Gleave teaches preschool languages and shared with us a song, "J'aime les éléphants" (to the tune of the cancan). She made us all sing. It was extremely good fun. I can't find a link to the song but if I ever do I'll post it here.

Ana Castillo was up next. She shared a few ideas with us.
Firstly, a Y7 Scheme of work based on "El Quijote" which included a "Facebook" page and a time line. 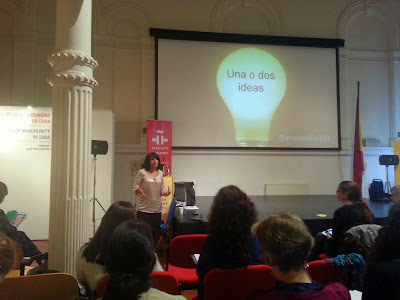 Secondly, Ana shared some ideas where students design their own learning mats, exercises using writing frames and she also recommended memrise to help with remembering texts.

The penultimate speaker was Nikki Perry. Nikki shared PRET with us.
PRET stand for Practise, Recall, Extend and Think.
It is used in her school for homework tasks.
Here is an example: 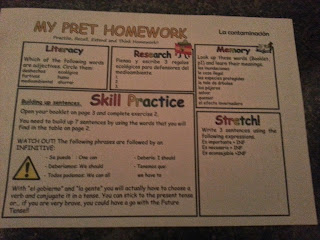 She also showed us the 1 jour 1 question videos on vimeo.com

The final presentation was by Natalio Ormeno.
Natalio shared with us his experience of living in New Mexico and in particular Christmas in New Mexico. His idea was to get students to research, and present, the customs, traditions, songs and food of a particular Spanish speaking country or area.

He also shared with us a spanglish version of the Night Before Christmas poem:

'Twas the night before Christmas and all through the casa, not a creature was stirring - ¡Caramba! ¿Qué pasa?   Los niños were tucked away in their camas, some in long underwear, some in pijamas, while hanging the stockings with mucho cuidado, in hopes that old Santa would feelobligado, to bring all children, both buenos and malos, a nice batch ofdulces and other regalos. Outside in the yard there arose un gran grito, and I jumped to my feet like a frightened cabrito. I ran to the window and looked out afuera, and who in the world do you think that he era? Saint Nick in a sleigh and a big red sombrero, came dashing along like aloco bombero. And pulling his sleigh instead of venados, were eight littleburros approaching volando. I watched as they came and this quaint little hombre, was shouting and whistling and calling by nombre: ''Ay Pancho, ay Pepe, ay Cuco, ay Beto, ay Chato, ay Chopo, Maruco, y Nieto!'' Then standing erect with his hands on his pecho, he flew to the top of our very own techo, with his round little belly like a bowl of jalea, he struggled to squeeze down our old chimenea. Then huffing and puffing at last in our sala, with soot smeared all over his suit de gala, he filled all the stockings with lively regalos, none for the ninos that had been very malos. Then chuckling aloud, seeming very contento, he turned like a flash and was gone como el viento,  and I heard him exclaim, y ¡esto es verdad!  Merry Christmas to all, ¡y Feliz Navidad!

I really enjoyed this Show and Tell and I'm already looking forward to next year's.

Wow what an amazing day, Dom! I wish I'd been able to come. Am definitely going to look into some of those ideas more.

It was great, Clare. You'd love the Perfection game.