Over the last couple of years I have been accused of being "anti-apple".

I now admit that, taken out of context, some of my comments about certain fruit-based products could be misconstrued as negative but I can assure you all that this is not the case.

You may recall that I attended #ililc3 at Southampton University on the 9th & 10th of February?

Many of the delegates there were in possession of tablet computers of all brands, shapes (mostly rectangular) and sizes.

The reason being that these people were using them properly.

By which I mean they were using them for things other than as teacher planners or very expensive 1980s "game and watch" consoles.

I even designed the handouts for my workshop "From squawk to talk" with QR codes so that tablet users could access the links instantly and without any fuss.

I also discovered lots of new applications (I still can't bring myself to say, or type, "apps") for both android and apple which would be fantastic should they be used in the MFL classroom. 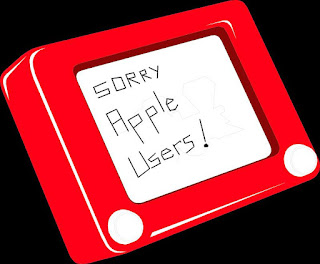 Apology accepted ;o)
Seriously - you make a REALLY important point. An iPad - as with any tool - is only as useful as you make it and it's important that they're used appropriately. It's not a magical route to amazing teaching and I wish people would THINK about how they can be best used rather than filling their devices with apps bought willy-nilly.
Lisa xx

I've seen the odd OK app, like the cRaMiT vocab app, but generally speaking I would be a bit iPad sceptical, partly because of the lack of Flash and the fact that some good websites with Hot Pots don't work. What have I missed?