If you live in the UK you may have seen this story in the newspapers or on television or radio on Friday.

The headline in the Daily Telegraph was: Headmaster who banned mobile phones makes the right call.

Please read the article and make up your own mind.

From having read the article, it seems to me that this school should not have banned mobile phones, on the contrary, it should have taught its students how to use a mobile phone responsibly.

It claims that since banning mobile phones the attainment of students has "soared".

It could just as easily have been claimed that making the students wear blazers (a rule which came in at the same time) has contributed to the improving academic standards of the school.

Ironically, the school which banned mobile phones is a Media Arts College.

Some people just don't have a clue... 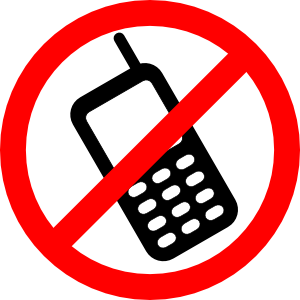 image courtesy of clker.com
Posted by Dom at 11:32

Can't see the need for total bans, just clear usage protocols which are enforced with confiscation and, if necessary, punishment.

Thanks for the comment, Steve. I think most schools ban students' use of mobile phones during lessons - I couldn't imagine why this made the national headlines.