Everybody speaks English, don't they?

One of the problems of trying to teach languages in the UK is that many students "don't see the point because everyone speaks English".

I recently arrived home from a short break in Edinburgh.

Whilst I was there I met lots of interesting people from all over the world (and I have the flyers to prove it!)

The European tourists were mainly Spanish, German and French.

One thing I noticed in the various cafés and shops (by which I mean pubs, obviously) I frequented was that many of them didn't even attempt to speak any English.

So, could they speak English, or not?

There was a lot of pointing and hand signalling and financial transactions mainly involved using credit cards or risking handing over the largest denomination note in the customer's wallet.

One morning a couple at the bus stop outside my hotel asked me if I knew what time the bus was due to arrive and how much it would cost.

Nothing strange about that - except that they asked me in French.

Of course, I answered them in French.

They couldn't possibly have known that I spoke their language and weren't in the least surprised that I was able to answer them.


It made me think how important it is, financially speaking, for businesses to employ people with even the most basic language skills. Greetings, prices, directions, food, etc.

When are we, as a nation, going to realize this?

Is it really so hard? 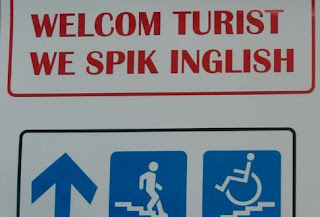