SMS in the MFL classroom (or MfL in MFL)

I have written 2 posts recently about using mobile telephones in the classroom. One on this blog and one for José Picardo's box of tricks site.
In the boxoftricks post I outlined my plans for using mobiles in different ways this term.
This week I finally took the plunge and planned an activity to which my Year 11 students (16years old) could text their answers.
The lesson I chose to do this was also observed by the LA MFL inspector. So, no pressure there, then.
I planned a range of activities which the students could complete using their mobile phones.
Firstly, they wrote and practised dialogues in French, which they then filmed (although the more self-conscious students used their voice recorders instead. The cowards!)
Secondly, they sent their work to my laptop by bluetooth which we played back in order to do some peer assessment.
Thirdly, I created an exercise using SMSpoll.net to which the students sent their answers via SMS. When I was setting up the exercise I chose the option allowing students only one vote per telephone. Their answers then appeared in a graph on my interactive whiteboard.
You can see the results here: 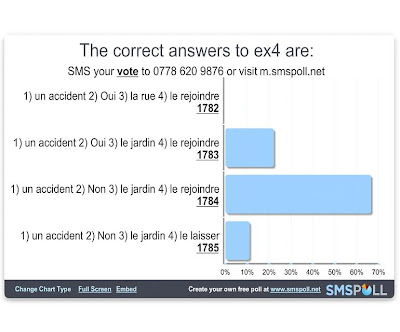 Was it successful? I hear you cry.
Well, yes, of course it was. In some ways. (The correct answer was 1783, chosen by only 20% of the students. They were so keen to send off their texts, they didn't read the questions properly!)
The inspector was impressed by my use of technology: "Mobiles for Learning" he called it. Perhaps that is what MFL really stands for?
The students loved it and asked if they could do it every lesson.
I like smspoll it's good, but not perfect.
Obviously, the brains behind smspoll didn't intend for it to be an MFL classroom application but with a few tweaks it could be.
Firstly, you can only offer multiple choice questions.
Secondly, as far as I can make out, it will not allow you to use foreign language accents and characters. It was quite difficult for me to find answers for the task which didn't have "é" in them. It does let you enter them, but they appear as a blank space in the results.
Thirdly, the students are charged each time they send a text, unless (like all students in this particular class!) they have a contract which gives them unlimited texts.
Having said that, I shall definitely use it again.
And while I'm in a technological mood, I think I'll take a look at polleverywhere, too.
Watch this space.
Posted by Dom at 07:55

Go Dom - this sounds awesome. Well played. I may take the plunge with my not so keen, do we have to do French Miss, gonna pretend I'm getting on with work but am really hiding my phone under the desk class. Watch this space. Cheers for sharing. You are an inspiration.
Suzi Bewell

This is some nice feedback from SMSpoll about the post:

Hi Dom,
Thanks for sharing your usage feedback and thoughts on SMS Poll on your blog post "SMS in the MFL Classroom".
We've been doing a lot of testing throughout 2009 of new features and we hope to be rolling these out throughout 2010. This will also support open ended questions.
We'll also be sure to look into the foreign language accent issue.
With regard to the student/voter being charged. Unfortunately there is nothing we can do about this. If the SMS is sent from their phone, then their carrier will charge them for it. Unfortunately (much to our disappointment) there is no such thing as a free-to-text mobile number yet. Alternatively if they have the internet on their phone they could vote by going to our mobile vote page m.smspoll.net. This option would be completely free for them.
Thanks for using SMS Poll - and please do feel free to let us know if you have any further feedback for us to consider.
Regards,
Ian